Back to news
THE SECOND PHASE OF SALES STARTS!
Share with friends: 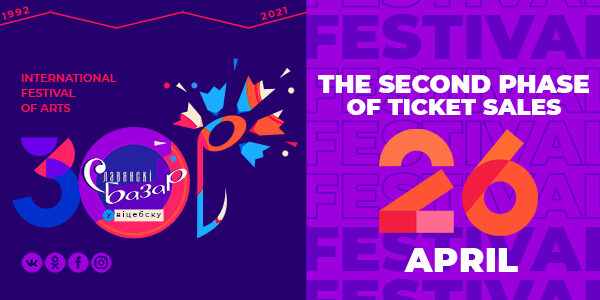 The second phase of sales starts on April 23 and will present programmes in the Concert Hall “VITEBSK”, as well as the traditional projects of the forum “THEATER MEETINGS”, “FESTIVAL WITHOUT BORDERS” and “PUPPET QUARTER”.

This year the projects in the Concert Hall “VITEBSK” will delight with their colorfulness.

The main event will be the XIX International Children Music Contest “VITEBSK-2021”.

For a day the stage of the concert hall will become home for the participants of the III International Dance Project “DREAM DANCE FEST”, in which the performers from more than 20 choreographic groups will take part.

The Yakub KOLAS National Academic Drama Theatre is preparing to meet the performances of the Honoured collective of the Republic of Belarus “CINEMA ACTORS' THEATER STUDIO of the Unitary Enterprise “NATIONAL FILM STUDIO “BELARUSFILM”, Independent theater project “TRITFORMAT” (Belarus), Smolensk State Drama Theatre named after A. S. GRIBOEDOV, MOSCOW THEATER IN THE SOUTH-WEST (Russia). Each production will find its audience, whether it be an adventurous comedy based on a play by a French author or a classic tragicomedy without reference to the era.

The first programme of the project “FESTIVAL WITHOUT BORDERS”, which invariably takes place in the VITEBSK REGIONAL PHILHARMONIC, has become known. It is “ENERGY OF JAZZ” with Leonid PTASHKA and others.

Tickets for the projects in the Concert Hall “VITEBSK”, the Yakub KOLAS National Academic Drama Theatre, the Belarusian theater “LYALKA” and the VITEBSK REGIONAL PHILHARMONIC will be on sale from April 23, 2021 at the box offices of Vitebsk and from April 26 – all over the world. By the way, the minimum price for a ticket to the Summer Amphitheater is 25.00 rubles, to other venues – 8.00 rubles.

In addition to the projects that are already on sale, the programme will include others, no less beloved. Among them there are the exhibition programme, the VII Street Art Fest “ON SEVEN WINDS”, Youth Day in Victory Square, the festival of choral music “SLAVYANSKY BLAGOVEST”, projects for family recreation in the Culture and Recreation Complex named after the Soviet Army (“Mazurino” park) and others.

From April 23 to May 21, 2021 the Board of Directors launches a campaign for legal entities. When making a one-time purchase of more than 50 tickets for projects in the Summer Amphitheater, there is a progressive discount of 5-10-15%.

For the anniversary of the International Festival of Arts “SLAVIANSKI BAZAAR IN VITEBSK” branded products are already being developed. You can get acquainted with the assortment and price, and order souvenirs and gifts in the online store BazArt.deal.by.

Branded festival envelopes, which depict the main venue of the music forum – the Summer Amphitheater – and the anniversary logo, are already on sale in the branches of the Republican Unitary Enterprise of Posts “BELPOCHTA” throughout the country.

Follow the latest news on the websites of the forum FEST-SBV.BY and the Centre of Culture “VITEBSK” GCK.BY, as well as in the official communities – @festivalvitebsk and @gck.vitebsk - on the social networks Instagram, VKontakte, Odnoklassniki, FaceBook!